Half Mag / Half Zine

Most Beautiful Beaches In Portugal

Close to the Spanish border, Moledo’s beach has been attracting visitors for more than a century with its long stretch of sand, pretty landscape panoramas of the Camarido Forest and views across the bay to the hills of Spain. Often windy and with strong waves, it’s ideal for kite surfers. Porto-born photographer Eduardo Leal, who knows the area well, says: ‘I love Moledo. The surf is good and it has lovely scenery. Other than in August, when it can be busy, it’s a relaxing and peaceful beach.’

Bordered by dunes and a nature reserve, Praia de São Jacinto’s long stretch of sand is a place of escape. The dunes are home to unique plant and bird life, there are no cafés or bars, the waves are good for surfing and the seemingly endless stretch of sand, ideal for long strolls, feels pleasingly wild and deserted: bring a book, switch off your phone and savour the sound of the waves. Taking the boat from Aveiro across the river is the fastest and simplest way to get there. 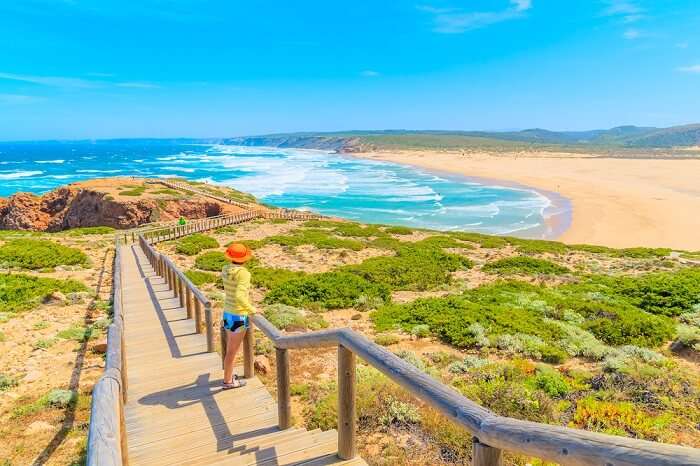 Deep in the Serra da Arrabida national park, about 30 minutes’ drive from Lisbon, the cove of Portinho is flanked on three sides by tall, forest-covered mountains (and on the fourth by the sea, of course). The sandy beach, gently lapping waves and plenty of rock pools to explore at low tide make it a great place for families. There are pedalos, some with slides, for hire and a small selection of restaurants and cafés. The beach is popular and parking is limited so arrive early in the summer (before 10.30am) if you don’t want to have to walk the steep road down.

Get there: fly to Lisbon then a 50-minute drive

Comporta, just over an hour’s drive south of Lisbon, has become popular with the chichi families of the capital, and Carvalhal, with its long stretch of white sand abutting the turquoise sea, is their beach of choice. There are plenty of practical additions, including umbrellas and sun loungers to rent, a tent for massages and a small library with books for all ages and daily Portuguese newspapers to read on the rustic terrace. Nearby is Restaurant Diniz, run by a former fisherman and famous for its excellent fish dishes and casual barefoot feel.

This wide bay of sand has something for everyone. The small river that joins the ocean on the north of the beach is great for children, with calm, warmer and shallower water. The main beach is patrolled by lifeguards in the summer and the waves are usually invigorating rather than violent. Just around the southern cliffs, accessible on lower tides, is a stretch of sand designated for nudists. There is a selection of cafés and restaurants on the clifftops overlooking the beach, the pick of which is Bar da Praia, where friendly Spanish owners Pedro and Pablo serve up tasty tapas and cold beers accompanied by a mellow soundtrack.

You need to park the car then walk 1km or so to Praia da Amália – across small streams, through a bamboo thicket, along a sandy path to the cliff edge and down rough-hewn stairs to the beach itself. This short walk often guarantees you’ll have this wonderful beach to yourself: along with a lovely stretch of sand, there’s a waterfall tumbling down the cliffs in one corner, rocks to explore and surf in which to play. There’s no lifeguard or café here, so bring a picnic and take care in the water.

Get there: fly to Faro then a one-hour-45-minute drive Rodrigo Machaz has been visiting the Algarve since he was a child and today runs Memmo Baleeira in Sagres, the hotel of choice for international surfers. ‘My favourite spot for surfing and a great beach day is Praia da Cordoama,’ he says. ‘Start at the Miradouro da Cordoama viewpoint which has amazing views of the coast. Once you’re on the beach, the long sandy stretch is perfect for a walk at low tide and the sand banks make for good surfing, depending on the swell and tide. Bring a bottle of wine: the sunset here is wonderful, too.’

Portugal’s best beaches are undeniably beautiful but the Atlantic water that borders them can often be chilly. Tavira, at the easternmost point of the Algarve beside the Spanish border, is your best bet for warmer bathing and Praia do Barril is a family favourite, with its long stretches of white sand bordered by dunes and calm, clear water. The area’s fishing history is evident in the many anchors that decorate the sand and the former fishermen’s cottages, now converted to cafés.

Get there: Fly to Faro then a 40-minute drive

Praia da Adraga sits just north of Lisbon at the base of the forested Sintra hills. Its sandy stretches are interspersed with rocks and the beach is flanked by high cliffs that provide much-needed shade in mid-summer. The wild Atlantic ocean dishes up plenty of waves, making it popular with surfers. A small restaurant overlooking the sea serves fish and seafood and, if you’re feeling active, you can hike after lunch along the cliff top to Cabo da Roca, the westernmost tip of Europe.

The sea that surrounds Portugal’s Costa Azul (‘Blue Coast’) certainly lives up to its name – it’s startlingly blue against the white rockface. Hidden along the south coast, amongst wild rosemary and clifftops, this secret cove is an undiscovered gem and ideal for those who like to skinny-dip. Protected by cliffs on both sides, it remains off-the-radar due to its small size and steep climb down. Here, the wild hills of the Setúbal Peninsula fall away to the searingly blue sea, and make this cape perfect for the adventurous beach hunter. The famous 18th-century Cabo Espichel Lighthouse and Nossa Senhora do Cabo church nearby, just 3km to the west, are also worth seeing – as are the 145-million-year-old dinosaur footprints that chase up the cliffside.

The Algarve coast can be over-run in the high-season but Praia do Cavalho is a beautiful sandy cove and, surprisingly, never too busy. Sandstone cliffs flank the golden beach and the sea resembles a sapphire shard wedged in between. Access is through a tunnel, with steps hewn from sandstone. Come at low tide to laze on the sand and explore the cliffside riddled with caverns and more tunnels. At high tide the sea swirls and surges into the caves and shoots spray out through blowholes in the cliff path. Nearby Benagil is famous for its sea caves.

Get there: Fly to Faro then a 50-minute drive

This secluded beach lies by the sandy banks of the Mira river as it meets the sea. A little further inland is the ancient fishing village of Vila Nova de Milfontes. The river meanders widely before the sea here and the beach is protected from the wilder waves further out. Try canoeing up the Mira river (contact Surfmilfontes, +351 914 732 652 ) or head into the village to feast on some of the Alentejo region’s finest fish dishes. The arroz de peixe, fish rice cooked in a clay pot, is particularly good at Restaurante Porto das Barcas (+351 283 997 160).

Along the Algarve end of the Costa Vicentina, this sandy beach is sheltered by giant orange sandstone cliffs sloping down to the sea. Popular with surfers, brave the waves with some body surfing. In the evening the cliffsides catch the sunset over the Atlantic sea and there is a decent local restaurant, which serves fresh fish. The coastal paths of Aljezur and the Rota Vicentina wind over the tops of the cliffs. Local donkey treks can be booked with Burros e Artes(+351 967 145 306).

Inhabited since prehistoric times, the Costa Vicentina has sparked the curiosity of adventurous people down the ages. As one of the most westerly parts of Europe, this was often the last shore that sailors would see as they set sail for foreign lands and the first to emerge on their return. Praia de Cavaleiro is one of many secret beaches here and has dramatic, strata rock formations. A goat track with wooden railing leads down to the sands, waves crash and seagulls, safe from Atlantic winds, chase the tide. Come here in spring to see storks building their nests. Fishermen’s trails and smugglers’ tracks weave their way over this coastline and the Rota Vicentina, which totals 400km of hiking routes along this coast, connects many of them. Nearby, a 2km stroll south, is Cabo Sardão, the most westerly promontory of the Alentejo region.

Getting there: Fly to Faro then a one-hour-50-minute drive 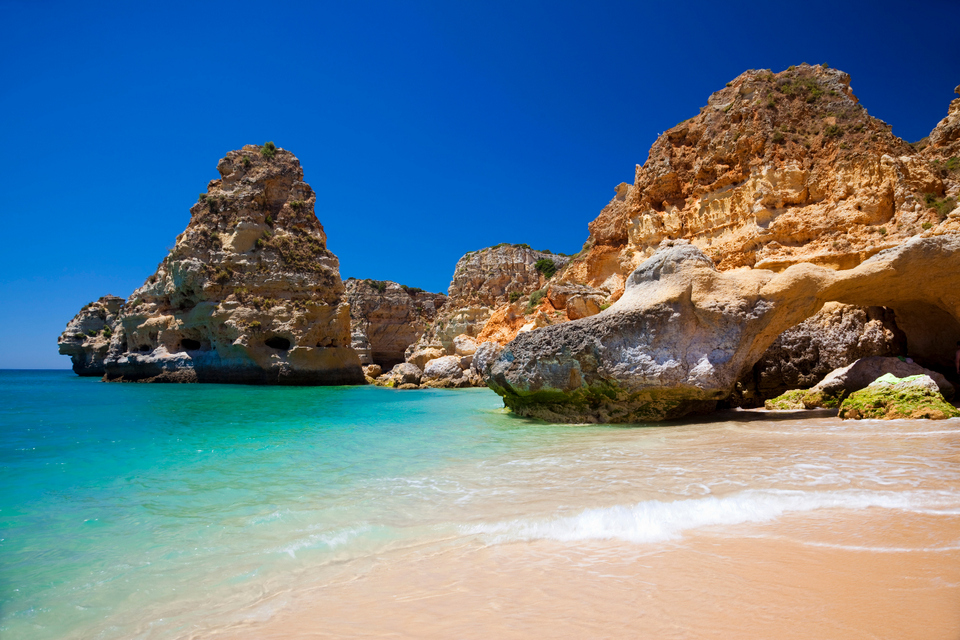 Head out over the high seas from the Peniche coast to this mysterious archipelago, just 10-15km offshore by ferry. Berlenga Grande is the largest of these islands. Pink rock and green grass slope down to the water’s edge, while hundreds of seagulls wheel and caw overhead. An enigmatic 16th-century fortress, built on the monastic remains of a rocky island, can be reached by a zig-zagging bridge out over rocks, or by a short swim. There are a couple of beautiful small beaches here, and caves with silvery fish can be reached by swimming, paddle-boarding or kayaking. Cova do Sonho is one of the best of several caves lit-up by the aquamarine water.